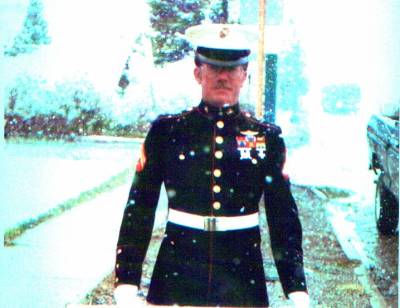 Rick was the driving force behind our Vietnam Veteran's Memorial here in Aspen.  When he started the effort, he was befriended by an unusual ally, the mother of a KIA.  Her name was Sanderson and she had never gotten over her son being killed in Vietnam.  She was bitter and very antagonistic toward the military.  But, she was also looking for some way to let the world know of her son, his death and the veterans of Vietnam.  So, Rick and Claire Sanderson joined forces.  With the two of them, there was no chance for Government to resist.     Claire had already given a large donation to our local library of records, tapes and so on of her son's beloved music.  Now, with Rick's help, they wanted a memorial built for all the Vet's.

Rick had organized both Memorial Day and Veteran's Day for years with the Boy Scouts putting flags on all the veteran's graves in our local cemetery.  Rick had lobbied our Elk's Club for money, space and facilities for Veteran's Day to allow all Veterans a place to come and quietly celebrate.     Rick stood patiently at myriad of city council meetings fighting for space, money and recognition of the Vietnam veteran.  Finally, in 1986 he got his wish and a block of marble from Marble, Colorado was cut.  This is the same marble that entombs the Unknown Soldier, the Washington Monument and the Lincoln Memorial.  Four spheres of red sandstone from our valley support the block and on the top are the emblems our our nation's armed forces.  A quote from Grant is bolted to the side of the block.  The dedication was in 1987.  ( a side note, only the Eagle, Globe and Anchor is consistently polished by the many)

At the memorial's dedication, Rick seemed at peace and fulfilled.  He had given his many medals away when he visited a Vietnam Veteran's hospital to the vets he visited.  He organized and tirelessly gave of himself to any young person in need he came across in his job as Pitkin County Sheriff's Department Detention Officer.  His basso profundo voice reached many a young and old offender alike.  They were shown the opportunity to change and many did so.     When Rick met my dad at our favorite restaurant, I had told Rick of Dad's membership in the Chosin Few.  The two of them quietly left the table and spoke hunkered over drinks at the bar.  Later, Rick gave me a list of books to read about the Frozen Chosin so as better to understand The Old Fellow.  I know now that the two of them shared that bond of Men of Combat and Hardship that cannot be fully realized by those that do, indeed, sleep soundly in their beds at night.     The Crew of Recon and The Chosin are the rock I chose to anchor my heroes in.  Any time, anywhere, George.  Thanks for all.