Six Kilometers SW of "The Rockpile"

The following story in this newsclipping appeared in several publications soon after the patrol. I believe this one appeared in the Sea Tiger. Leatherneck Magazine ran this same text in their Magazine.

As is usual in wartime stories much is left out and only known by the participants and those who monitored the action from a rear command post. The history of this patrol is very lenghty as it contains information of a previous patrol in the same area, the details of the actions of the patrol members, command action and inaction, the North Vietnamease efforts to engage us, and information pertaining to what happened after the return to our Camp at Dong Ha. There were five awards for Valor presented to the team.

Although the entire team was decorated not one of us considers ourselves a hero. We fought for each other and no other reason. Our desire to survive proved to be greater then the enemy will to kill us. What is most significant about this patrol was the Team Effort of those Marines who supported us from artillery units, Marine fixed wing fighters, Marine Helicopter Squadron personel who flew slicks and gunships, and an Air Force "Birddog" FO who flew above us for most of the time. Perhaps there will be a time when I can explain what happened during this patrol in another venue. Until then........ 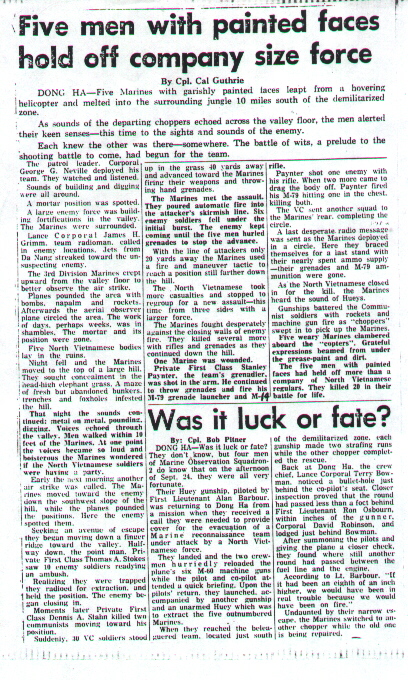