Recognition Long Overdue But Not Forgotten

On Memorial Day 2001, as a result of a long investigation and followup to correct an oversight of the paperwork during the war, Bob Lake was awarded the Purple Heart for wounds sustained during the American Beauty Patrol of 8-9 June 1969. There is one man who deserves all the credit for making this happen and that man is Jeff Grosscup, 1st Lt. USMC Ret.

The award ceremony took place during the traditional Memorial Day Services at the Lake View Cemetary in Aitkin, Minnesota.

A local newspaper ran a story on 23 May 2001 which details the backgroud on this and it can be found at :

It was a Very Memorable Day!! 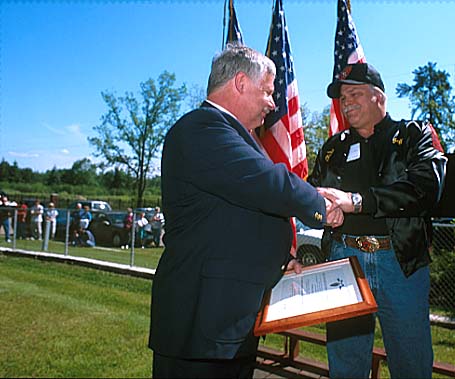 Good morning, my name is Jeff Savelkoul, I'm a Minnesota Vietnam Veteran, and President of the Alpha Recon Association. I'd like to thank you all for coming out on this day of remembrance, to help us honor our fallen comrades, who paid the ultimate price to preserve and protect the freedoms we enjoy today.

We also gather to pay tribute to one of our living veterans, Bob Lake from Aitkin, Minnesota to present him with an award that he so justly deserves from a time so long ago.

Today I will speak of Vietnam, and the teammates that we lost there. Bob and I served on 6-8 man reconnaissance teams with Alpha Company, 3rd Reconnaissance Battalion, United States Marine Corps, Vietnam. Highly trained 19 year- old kids, in a highly specialized unit, gathering information under cover behind enemy lines. We are both very grateful to be here with you today.

In early 1967 I was a radio operator on Recon Team STRIKER, operating out of Khe Sanh combat base in the NW corner of South Vietnam. On June 30 1967 Team STRIKER was being inserted by helicopter into a landing zone in the jungle, when we were hit hard by enemy ground and AA fire. As the pilot lifted from the LZ we were hit with an RPG rocket and burst into flames. The pilot tried his best to clear the ridge to safety but could not. We hit the trees, sheared off the rotors, and crashed 90ft to the ground in a ball of fire. Killing four of my teammates instantly, and the pilot. We were all hurt bad-we couldn’t get them out.

My Marine brothers and teammates were never recovered and still lie on that hillside in Vietnam today. Their names are Merlin Allen, Glen Runnels, John Killen, Michael Judd, and the pilot John House. Teammate Dennis Perry died of wounds July 2, Eugene Castenada died Aug 12. On this day of remembrance I ask that you take some time to think of them with me, and pray for their recovery and return to their families, so they may finally rest at home in the land they gave their lives for.

Bob Lake was a member of recon team American Beauty. In early 1969 his team was operating out of northern I corps running patrols in and out of the DMZ. Gathering information on enemy troop buildups in the area. A not so friendly place for a young kid from Aitkin to be.

As the citation will show, Bob rose to the task and outperformed even his own expectations, a true Recon Marine...

The purple heart medal was established on Aug 7,1782 by General George Washington, as the "badge of military merit". It was the first authorized military decoration. It fell into disuse after the Revolutionary War and was revived again in 1932 by General Douglas Mcarther as the Purple Heart, where it has held its place of high honor ever since.

Jeff Savelkoul then read the citation and saluted Bob Lake

Robert W. Lake, of Aitkin, MN, during June 1969, was  part of a six man Marine Corps  reconnaissance patrol that had been inserted into the DMZ June 6 to report on a North Vietnamese Army Battalion.

Late morning, June 8, the patrol named "American Beauty" had moved only a short distance from its night position inside the DMZ when the patrol leader detected NVA approaching from the left and fired on them putting the Marines in a 90 minute fire fight where they couldn't move. An observation aircraft radioed the team that they were being attacked by a platoon sized unit. The  team's automatic weapon's fire along with close air support halted the NVA advance. The team was able to move out.

The self-defense firing blew any concealment  the Marines  had, and for four hours they zigzagged through the jungle stopping frequently to listen. About 4:30 they were sitting slightly off the trail  when LCpl. Lake saw two NVA approaching from the West, only 15 meters away.  The team fired on them, killing one and wounding the other. Extraction of the team and the POW was ordered. As the Marines moved to a hill to await helicopter rescue, they received intense small arms fire that immediately killed its officer.The POW was also killed.

As the team assaulted the hill it became apparent that there was a dug in platoon sized force. During the assault LCpl. Lake was wounded in the leg. They called in helicopter gun ships and jet aircraft. The close air support fell only meters from the widely scattered  Marines. Several helicopter extractions were attempted but forced off because of crippling enemy ground fire. At 0130 hours, further attempts  at air rescue were stopped and extraction by ground forces ordered. As darkness fell the team had  been able to crawl together behind some fallen trees where they could take cover. During this time a hard metal object struck the tree and fell between the Marines, emitting  a sulfur--like smell and  hissing sound. One of several enemy dud grenades that should have been deadly.

Throughout the night the Marines remained  on the hill and the NVA used the cover of night to remove their dead and wounded and leave the hill. At 1130 hours on June 9, an infantry company linked up with the recon team, retrieved the body of the dead officer and walked American Beauty out.

In addition to the Marine officer KIA, all the other team members were wounded from bullets or shrapnel and earned the Purple Heart.

Immediately following the patrol LCpl. Lake was sent to SCUBA school in the Philippines and the other members assigned to new teams. American Beauty was never together again and the award writing process for Lake never completed until now.

On Behalf of the President of the United States, the Commandant  of the Marine Corps, your Brothers from the 3rd Reconnaissance Battalion and the Citizens of the United States of America, is with great honor that I present this Purple Heart Medal and certificate to you this twenty-eighth day of May 2001.

Like a little piece of Norman Rockwell. After the ceremony was over, approx. 100 of the 250 attending lined up, as if in a receiving line at a wedding reception, to give Bob a personal congrat's. This took the better part of an hour.

We then moved over to the American Legion Post in Aiken, MN.  Here they had a typical farmers harvest brunch awaiting all. Thick, large pieces of chopped steak, joined by mashed potatoes and beef gravy, green beans with bacon, fresh homemade bread and butter, and the crowning touch of Americana, apple pie with fresh whipped cream. I was looking for the nap room after helping my wife Sandy finish her plate. And a lot of table hopping was going on. It took Bob twice as long to finish, due to the folks wanting to have a few words with him. It was great!

Out to Bob's farm for the afternoon. The driveway was packed with cars on both sides. Bob has four older sisters and three were present to effusively thank, anybody that was wearing a 3RD RECON emblem. As there were only four of us from the BN.present at the Cemetery, Jeff Savelkoul and his wife Karen, Jeff also presented the Purple Heart to Bob and gave an emotion filled presentation, my self and my wife Sandy, I preceded Jeff with the reading of a letter that Jeff Grosscup requested from our Battalion Commander, Col. Richard R.Burritt USMC Ret.. In that letter the Col. described his own difficulty in going to the Vietnam Veterans Memorial Wall over a four year period before he was able to finally read the names of the men from our BN. who paid the ULTIMATE PRICE for our freedom. He also went on to praise Bob.

I was also tasked by Jeff Grosscup and Jeff Savelkoul to follow the above with a reading of a proclamation of Commendation from the State of Minnesota and signed by our Gov. Jesse Venture. I got a chuckle from the crowd when I shared with them that I had been chosen to read it because of my nonpolitical nature.

Jeff and I were joined by Tommy L. Marshall 68 as representing ALPHA CO. Also joining us at the Cemetery and the Legion brunch was Joe Petrovich from BRAVO CO.and his Wife. I think between Jeff and I we had every item of clothing and jewelry that our BN. PX. had to offer on..... A lot of skulls and crossbones walking around a Cemetery. And Tommy and Joe contributed their own Bn. logo clothing statements.

The local media, print, was present and snapping away, so we should have their rendition to read soon.Don Scwinn's contribution of  nametags with the 3RD RECON logo and ALPHA CO on them seemed to make us more approachable to those that wanted to talk with us through out the day.. Thanks Don.

And  also a great thanks to the power behind this Honored Ceremony.... 1stLT Jeff Grosscup USMC Ret. As my good friend and fellow RECONNER, Floyd Nagler, would say.... "A warm fuzzy was had by all".

And so it was!