Patrol Recon Patrol Report . Trail evidence was found of 5-6 tracked vehicles that moved N.W. of YD 178534 to YD 178536 and then continued southeast on a ridgeline. It was parallel to a foot trail.Team moved to 179528 team heard high-speed engine that sounded like a tank and heard clanking of tank treads. It sounded though it was attempting to move up the northern slope of hill vicinity YD 175523. Heard distinctive sounds of tracks for 45 minutes.Tanks not observed by recon team.

The Below info on the P76 is from http://members.aol.com/panzersgt/Threat/pt76.html 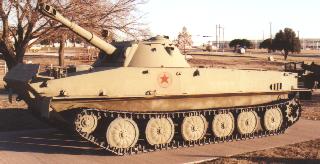 Back To Historical Page