This page is noteworthy for several reasons. It documents two recon missions of Recon Team Breaker. It also shows the caring and thoughtful nature of its patrol leader. Team Leader Cpl. Gerald "Andy" Anderson was a Marine who always was concerned with the welfare and recognition of  those he served with. In this case his feelings are displayed in his recommendation for a job well done to the Army Pilots and Crewmen of the 120th Aviation Company who flew gunships. During the fall of 1966 Marine Air Assets were in short supply and on many occasions Army Helicopters  were used to support the Marine reconnaissance effort in Northern Quang Tri Province.

This recommendation for recognition/award was prepared by "Andy" while he sat on his cot inside a canvas squad sized tent shortly after the patrol. This copy was given to me by "Andy" to preserve as an historical record. It is my understanding this hand written statement was retyped by the company clerk and forwarded through the Chain Of Command. It is not known if this recommendation was ever acted upon or how far it made it after leaving the company. In any event Razorback Crew's certainly saved a recon team from decimation on 20 and 21 November 1966. The business card pictured below was given to "Andy" after the extraction on one of these two days. Perhaps someday the identities of these Army Personnel will be known and we will thank them ..... a long time ago but not forgotten.

The members of the Team Breaker on this patrol are listed below. Four of the members from the original Team Breaker are now deceased due to a shockingly similar ravaging disease. The fourth man not listed as deceased in this table was an original team member and was medevaced prior to the patrol. Carl "George" Boehler passed away on 22 January 1990. 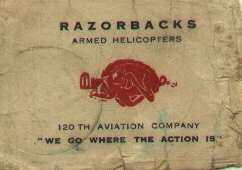 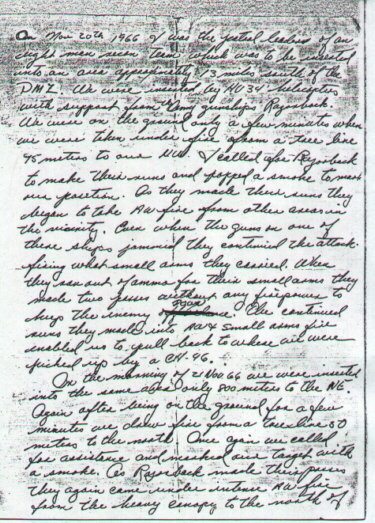 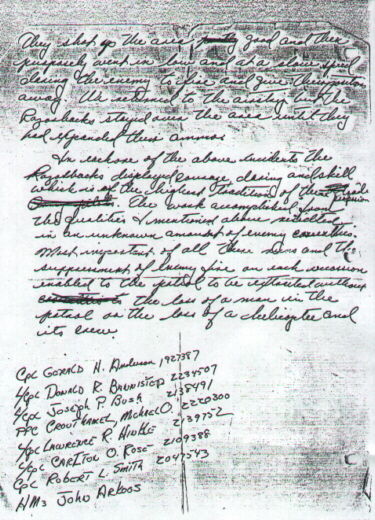 Response From A Razorback

The 120th Aviation Company has a very nice homepage at http://www.angelfire.com/az3/razorback947